Vijay Kelkar: “My coming into the Government of India was all thanks to DP Sahib” 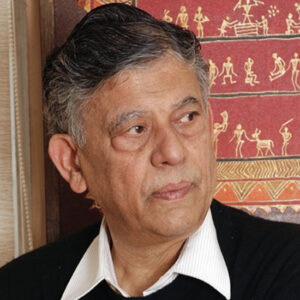 Dr Vijay Kelkar is one of India’s pre-eminent economists. He is a former Finance Secretary and was Chairman of the Thirteenth Finance Commission of India. Known as the architect of the GST, Dr Kelkar is currently the Chairman of the Forum of Federations, Ottawa & India Development Foundation. He worked with Mr D.P.Dhar at the Planning Commission of India from 1973-1974. The following are extracts from a phone interview with Tarika Khattar recorded on 5 May 2022.

When did you first meet Mr D.P. Dhar?

I met DP Sahib in 1972 in Kathmandu where I was teaching at the Centre of Economic Development and Administration. DP Sahib was leading the Indian delegation for discussions between our Planning Commission and Nepal’s Planning Commission. We met in the house of our Ambassador L.P. Singh. Before his visit itself, the Ambassador had told me that I must meet this delegation and he spoke in the most glowing terms about Mr D.P. Dhar. He said that Mr Dhar is such a persuasive man, as he put it to me, I still remember his remarks: “Vijay, he is so persuasive, he can persuade even a pillar off a house.” And he really could persuade anybody. He had enormous persuasive powers.

He came along with another person who later became a mentor, Mr Lovraj Kumar, who was also part of the delegation. And his special assistant was Gopi Arora. These people I remember distinctly because Mr L.P. Singh had asked me especially to see them. That night after dinner was over, I was about to leave and Gopi Arora came up to me. He said that the Minister [Dhar] wants to see you tomorrow at breakfast. I said fine and the next morning I drove my car there. He was staying as a guest of the government at one of the palaces which was a government guesthouse.

He enquired about what I was doing and I said I’m teaching here. He said: “Vijay, why are you wasting your time in Kathmandu? Come to Delhi. We are doing exciting things in the Planning Commission. Professor Chakraborty is in charge of our planning and you must come.”

I remember I was so excited because Professor Sukhamoy Chakraborty was one of India’s greatest economists. So I was very tickled by the thought that I can work with him so I readily agreed. And that was my first meeting, first substantive meeting, with DP Sahib.

What was your initial impression of Mr Dhar?

I found that Mr L.P. Singh was not at all exaggerating. I was fully charmed by his affectionate nature. I was much younger but he didn’t make me feel like I was some young fellow. He gave full attention to what I was saying. He was extraordinarily considerate. I was taken with him right away in that meeting. I thought it’s good I’ll get to work in the Planning Commission.

Within six to eight months of this meeting, which I think was in the winter of 1972, I joined the Planning Commission as a consultant.

What was your role at The Planning Commission.

So I was there with DP Sahib in the Planning Commission before he went to Moscow for his second term as Ambassador. I was working with Professor Chakraborty on the Perspective Planning Division and Economic Division.

What was it like at The Planning Commission at that time?

That was the most lively time, if I may say so, in the Planning Commission after many, many years. He [Dhar] had brought in all sorts of people into the Planning Commission. It was throbbing with intellectual activity. I remember there was Professor Yoginder Alagh, who was also inducted by DP Sahib to head Perspective Planning. He later became the Vice-Chancellor of JUNU and also Union Minister of Science and Technology. There was B.S. Minhas. There was Arun Shourie as a consultant. I was also there as a consultant. Then Nitin Desai, who later on became the highest level undersecretary to the UN, was also working there. And he had brought Mr Vasant Rajdhakshya [former Hindustan Unilever Chairman]. So it was really throbbing with energy, throbbing with ideas and he [Dhar] encouraged everybody. He didn’t stop any ideas from flowing.

I fondly recall once when he was going back to Srinagar, he told me and Gopi [Arora], ‘you come with me and stay with us’. It was the first time I was introduced to the wazwan and I was tired of food. And he was still adamant saying, ‘Vijay this is only half of what we would be making.’ And my god, I was so full. It was the best meal, the cuisine of Kashmir… and I still remember Gopi and me used to talk about it. I’ve never tired of eating so much in my life. Then he took us to see a wonderful movie, Manoranjan, at Broadway Cinema. He ensured that Gopi and I went and saw Pahalgam and Shalimar Bagh and all the sights. He was a more than perfect host… just so very gracious. I never saw him getting angry. He was always smiling and was an extraordinarily generous man.

My coming into the Government of India and whatever professional contribution I could make when I was in Delhi, was all thanks to DP Sahib. Had he not asked me to come to Delhi, I would have been in Hyderabad because I was going to go back. But he really opened me up to a completely new world of policy-making and for that, I was always grateful to him.