D.K. Barooah: “D.P. had a sharp sense of social reality” 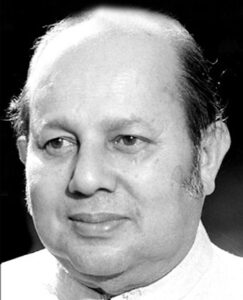 I had the great privilege of knowing Shri D.P. Dhar for a very long time. D.P. as he was always referred to, played a major role in public affairs for over three decades in Srinagar and in Delhi. He was one of our leading diplomats and a most forceful Minister for Planning. I was intimately associated with many of his activities, particularly in the last phase of his career as Deputy Chairman of the Planning Commission.

D.P. had a sharp sense of social reality. Whenever we discussed any question I found that he could combine a very precise grasp of specifics with an ability to see the question in its broader social setting. I made it a point to discuss most issues of policy with him and always looked forward to an interesting analysis of the social implications of political and economic decisions. D.P. never got lost in the minutiae of matters and was always aware of the long-term significance of what could seem to be trivial problems.

When D.P. moved to the Planning Commission some people were surprised that someone who had made his name in foreign affairs should be asked to look after an area so far removed from the subtleties of diplomacy. But questions of social and economic development were always close to D.P.’s heart. In Lucknow as a student leader, later in Kashmir and even as Ambassador in Moscow, he was deeply involved in such questions. For him the move to the Planning Commission was a great fulfilment since he believed that any rapid advancement in living standards had to be based on planned development and that no poor country can afford the hesitations, approximations, inefficiencies and injustices of a free market.

D.P.’s faith in planning was not based on any doctrinaire reverence for the experience of this or that socialist country. He recognised the uniqueness of the Indian situation which is precisely why he was equally scornful of those who held up an assortment of market-oriented capitalist countries for emulation. D.P. saw planning as the principal instrument for maintaining national unity and integrity. He had been deeply involved in the Bangladesh crisis and could see the disasters that could arise from a sense of economic deprivation in any component part of a state. He felt that in the absence of planning the gaps between the different parts of the Indian Union would widen and lead to similar problems. For him planned development was the only way of controlling the fissiparous potential arising from the colonial legacy of uneven development.

D.P.’s perception of the political element in planning went further. Not only did he see the connection between planning and national integration. He also saw the link between the objective of poverty-removal and democracy, between the target of self-reliance and non-alignment. D.P. never claimed to be an economist and would indignantly deny any such honour if it was thrust upon him. He did not see ‘Garibi Hatao’ as a change in this or that coefficient in some elaborate model. He saw it as a political promise that had to be kept. He did not see self-reliance as a change in a term in some accounting formula. He saw it as a vital component in the search for national independence.

I had some personal connection with one aspect of this part of planning. During my tenure as Minister for Petroleum and Chemicals I remember how deeply concerned D.P. was about self-reliance in oil and fertilisers. Because of his acute perception of international politics, he could see that food and fuel would be two major instruments in the international power game. He recognised, long before the energy crisis, that if India continued to depend on imports in these two areas, its economic development and possibly even its political independence would be at the mercy of the unpredictable forces of international politics. Hence the need for rapid self-reliance in these areas. Fortunately, the results of some of the decisions taken in those days are now in evidence and there is every indication that in these two critical areas we will soon be quite independent. It is indeed fortunate that at a critical time the man at the head of the Planning Commission was someone who could look beyond the narrow calculus of outlay and return and see the strategic significance of self-reliance.

D.P. was often a figure of controversy during his long public career. Very few of these controversies could surpass in acrimony the one that arose around his passionate advocacy of the takeover of the wholesale trade in food grains. All manner of ills have been attributed to this policy. But whatever one may feel about the merits of the proposal one must recognise the logic that led D.P. to place such importance on it. He believed that our drive towards prosperity and self-reliance would continue to be a rough one unless food supplies to the urban masses and to the poor in rural areas could be guaranteed even in a bad year. Otherwise the all too familiar sequence of inflation, erosion of resources and cutbacks in investment would be repeated. In his view, the only way to ensure price stability and equitable distribution in a bad year was public distribution, the only way to run public distribution was public procurement in good and bad years and the only way to secure public procurement at a reasonable cost was the takeover of wholesale trade. He had no faith whatever in the ability of private trade to ensure a proper balance between incentives for farmers and protection for consumers. There were other strands in his thinking of which the most important was his perception that food supplies could become a powerful instrument in international politics. He was convinced that self-reliant and just development would never be secured without the takeover and hence the passion that he put into his advocacy.

D.P. was also accused of having a misguided faith in heavy industries and of neglecting agriculture. In my view this charge is false. He certainly believed in the importance of industries like steel and heavy engineering. Some of the emphasis that he placed on such industries may have arisen from his belief that our failure to maintain the tempo of development in these sectors after the devaluation of 1966 had in posed a fatal weakness on our development efforts in the Fourth Plan period. But D.P. never fell into the trap of seeing the situation as one involving a choice between investments in heavy industries or in agriculture. He knew that self-reliance and poverty-removal required that both be developed. Nobody who saw him in action in State Plan discussions can possibly believe that he underrated the importance of irrigation or agricultural extension. In fact, because of his involvement in such work in Kashmir, he was much more au fait with technicalities in this area.

What were his major achievements in the Planning Commission? The first is of course the way in which he articulated the objectives of self-reliance and poverty-removal so that they were no longer pious platitudes but precise concepts fully embodied in the details of outlays, production priorities, projects and programmes. His great joy and pride were the special programmes for drought-prone areas, hilly tracts, tribal regions, for small farmers and for agricultural labourers. His second major achievement was to involve the Planning Commission much more in the implementation of the plan. Within a year of taking over, he had set up new divisions dealing with the appraisal and monitoring of projects and programmes staffed by some of the best people in the country. He recognised the importance of fiscal, monetary and licensing policies in our mixed economy and saw to it that the Fifth Plan contained a policy frame.

Apart from these the one thing that struck me most about his tenure in the Planning Commission was the extent to which he succeeded in ensuring public participation in plan formulation. D.P. really believed in participatory planning. He never wanted planning to be an exercise conducted in the cloistered seclusion of Yojana Bhavan. He wanted widespread and open debates about the plan by academics, by administors, by political workers. Never have the processes of plan-making been as public as they were with the Fifth Plan. D.P. himself went all over the country talking, arguing, cajoling in his own persuasive and charming way. He urged others in Yojana Bhavan to do the same. He wanted his own party men to discuss problems, to suggest solutions, to participate in implementation. For him planning was not merely a technical exercise but a political process and hence much too important to be left to experts.

Much of D.P.’s faith in planning and participation was the legacy of Nehru. D.P. grew up intellectually in the years around 1942, when independence seemed imminent and debates about the nature of independent India were widespread. All of these debates were strongly influenced by Nehru and D.P., like many of us, inherited some Nehruvian traits—the optimism, the slight impatience with things traditional, the desire to push the country to new scientific ways of thinking and being, the urge to reach all frontiers, to test all limits, and as a result of all this a powerful faith in the three great ideals of secularism, non-alignment and socialism. D.P. worked relentlessly for all three—for secularism as a political leader in Kashmir, for non-alignment as a diplomat in Moscow and Delhi, for socialism as Deputy Chairman of the Planning Commission.

This book (Planning and Social Change), put together from his speeches, covers just the last phase. It was one of the last things he did before his tragic death at an age when he had so much more to give to his country. Nehru’s vision of independent India and offered these speeches as a commentary on Nehru. They are that and much more. They are the words of a man of immense passion, intelligence and humanism, of a man whose loss I, for one, continue to feel till today.

At the time of writing this, D. K. Barooah was the President of the Indian National Congress. This article was originally published as the foreword to D.P. Dhar’s book, ‘Planning and Social Change’.