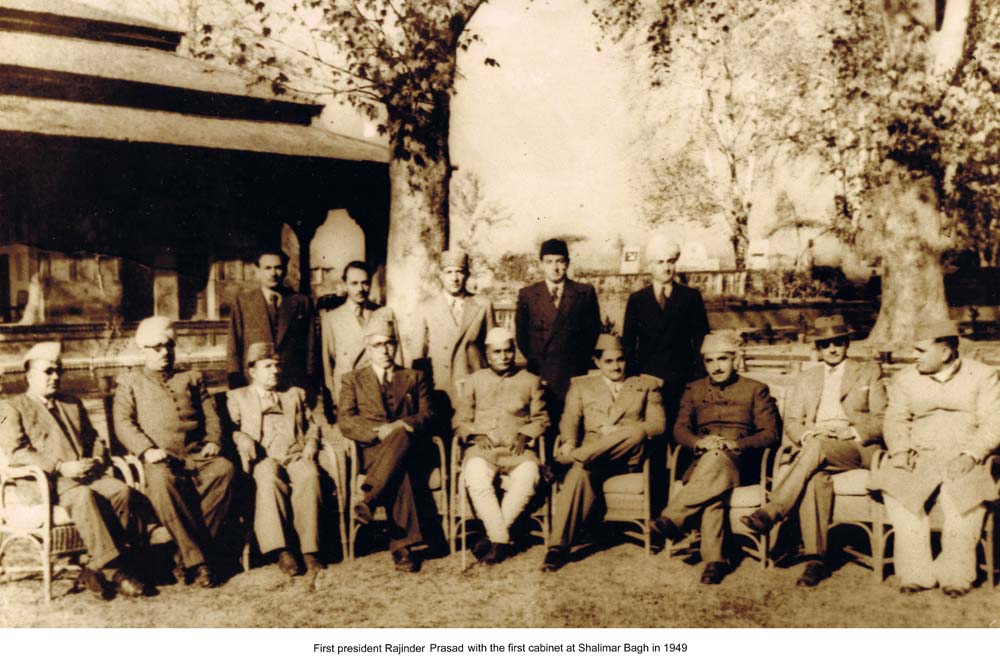 The Constituent Assembly met in the Assembly Chamber Rajgarh Palaces, Srinagar at Eleven of the clock.

The House is debating the monarchy, Dogra rulership and the prevalence of feudalism in Kashmir.

Hon’ble President: Permission is granted provided the House has no objection.
Note:- The House agreed.

Hon’ble D.P. Dhar: Sir, in the last two days we have heard the discussion on the report and recommendations of Basic principles Committee. We had the privilege of listening to the very lucid and comprehensive speech from the Leader of this House. We have also had the privilege of hearing the views supplemented by his Dy and by my Hon’ble friend Mir Qasim and other Hon’ble members of the House. I do not propose therefore to wear you by going over the ground, which has already been covered. But I feel that here we have two or three aspects which deserve more consideration than they received so far. A good deal has been said about Feudalism, its origin and its capacity, but it is to be realized. Sir, that feudalism is I alliance with Imperialism in the world. We have to see that wherever monarchy has existed in those parts of the world they have been the playground of Imperialism, exploitation and internal misrule. In our own country, Sir we must to forget the hereditary rulership of the Princes and the part played by the Indian Chamber of princes as an instrument of the British Imperialism in crushing down the freedom struggle of our people. We have to remember the role played by the Prime Minister of India in backing us at the time of trouble during the Quit Kashmir Movement that was to lead to the concision immediately before August 15, 1947. At the time of the partition of India it was the aim of the British Imperialist to retain in India as many feudal Puppets as possible and it was in pursuance of this policy that two of the staunch feudalists were sought to be preserved one in the South and the other in the North. What has been described as fan tastier [?] of these two princes was not merely to their individual activities but they were the tune of somebody else. They were under the discretion of British Imperialists trying to throw out the aspiration of their own people.

By this system of alliance between Imperialism and Feudalist Lords which we saw in our own country and the amount of suffering which we had to undergo is better known to the world. In view of the Imperialistic designs of the princes of India in general and the two princes in particular, how is it possible for us to keep any association with the feudal associates of foreign Rulers. There is another aspect of the question to which, with your permission. I would like to draw the attention of this house. It has been said in some quarters that this particular institution in our country symbolizes the unity of the various sections of the various people of this country. It is true that this system has functioned as a cohesive instrument but that this coercion was a direct result of the enmity, which is inherent in the system. What appears to the ordinary eyes unity on the surface is in actual practice only the unity of the exploiting classes. In our country, we should remember the role that the Jagirdars and Zamindars associations played throughout our freedom struggle. Those gentlemen who ordinary were trying to sow the seeds of disunity among the people in the name of the religions of Hinduism and Islam combined on these platforms but were threatened by the same source namely the source of the people. What the Leader of the House the other day referred to as a combination of the monarchy and priesthood was demonstrated in our own country and is clearly known by the fact that the high priest of the Muslims in Kashmir, who incidentally happens today to be the supreme Head of the so-called Azad Kashmir Government has described the Hindu ruler as the image of God. We must not forget the unity ( if at all you can call it unity ) which is found not among the people but among the exploiters of the people. On the contrary, I must believe that this system is responsible for creating discord and disunity among the broad masses of people. And it is my belief that if this symbol of unity disappears, conditions will be created for the genuine unity of the people (Cheers)………..a unity which will be based on the common terms of our common problems, a unity in which all the sections of the community in the country will move together for the reconstruction of their motherland.

Regarding this aspect, I will draw your attention to the fact that on the many occasions doubts & suspicious are raised with regard to the progressive policy which I am sure, has led to great political, economical and social transition in the country and this has received full support of the people and the majority in India. I am equally sure that whatever we may have done so far and whatever we propose to do will equally receive the support of the masses. Indeed, this is based on progressive lines and we are free to do it. It is the joint effort of the people of India and the people of Kashmir which should ensure the relationship of association between the people of India and the people of Kashmir grow more strong and we hope that they will constantly lend us their support in fighting against the conservative elements within the country and abroad.

Now, Sir, I will come to another point. It is being held in certain quarters that since the power has essentially been transferred into the hands of the representatives of the people the Institution of Monarchy that is only a legal formality does not call for material discussion. But this argument implies that this institution of Monarchy should have the necessary capacity to adapt itself to the changed circumstances. Even if it were so, the argument would not hold any water in as much as it is not the question of the system of the institution and its capacity alone. But also the fact that the power that the people have acquired is the result of their own unceasing struggle and the sustained efforts of its determined leadership.

It is oblivious that the redundancy of the Institution is such that one cannot look upon it in an academic manner in a country where feudalism has been totally abolished. Under these circumstances, we cannot allow hereditary rulership to continue any longer. We have entered upon the threshold of a new age and the history has given its verdict and we cannot change its validity thanks, Sir.