This issue is a departure from the old ones inasmuch as a teacher Editor has yielded place to a student. Our journal is deeply grateful to Mr. R. R. Shresta, the outgoing Editor-in-Chief, for what he did for its excellence. But youth is audacious and it would have its say, as it feels that upon it lies the burden of past disasters and future reconstructions. Only let its statements be serious and sincere.

I am not one of those who accept the role of natural leadership of the future generation, allotted to youth by the invited guests in students’ conferences in their expansive moods of gratitude. I believe that the future does not belong to us as a matter of prescriptive right but has to be created by conscious effort. As consciousness is based on knowledge, and future is built out of our present environment the duty of analysing the social situation is primary. In this we enjoy the detachment secured for us by our kind guardians and teachers. If we can turn our conclusions to release and intensify the forces implicit in the society to which we belong, then and then only will the rights of leadership accrue. Till then active civic participation on the strength of our analysis should he sufficient. 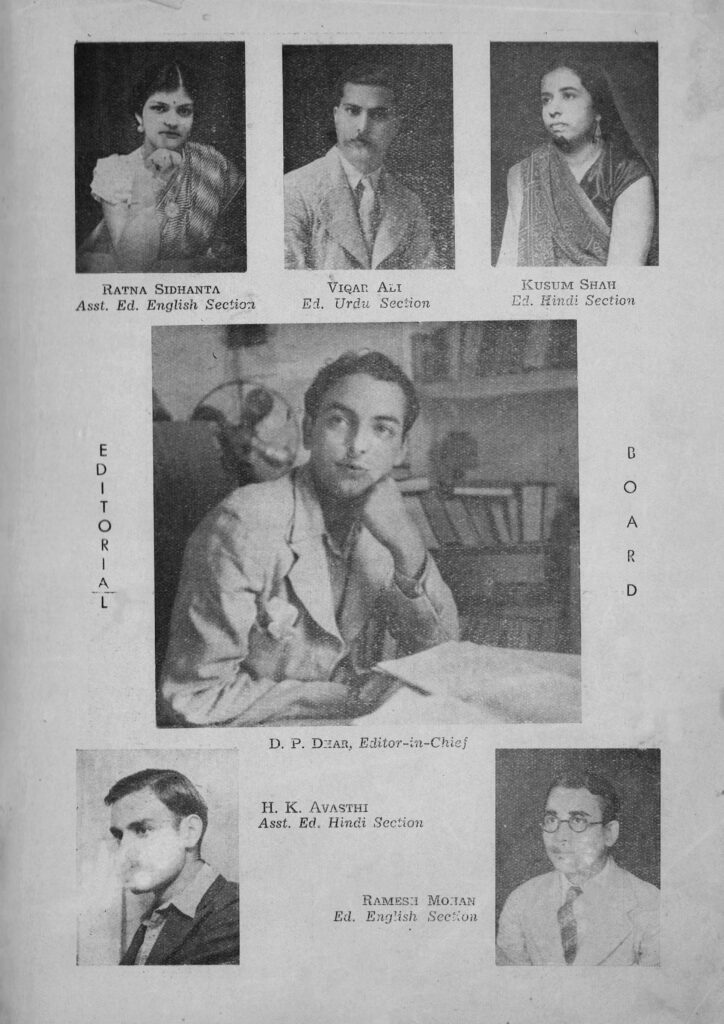 It is obvious that the social situation today is critical. The first fact about the crisis is that it is twenty-five years old—just the age of. youth. The war that began in 1939 was begotten by the war that ended in 1918. The student community of today is sandwiched between these two wars. The last Great War had completely shattered the old world with all its stable faiths and since then the mind of the world has split double. On the one hand, there was that sense of frustration which at its best sought to cover its nostalgia by attributing to it the virtues of positive attitude, and on the other, there was the growth of a new faith in humanity recuperating the ancient laws. If defeatism had affected the soul and reduced it to the subconscious, the human spirit sought to integrate itself through various endeavours. Sur-realism in painting, streams of consciousness in novels, Imagism in poetry, betrayed the urgent gropings, no less than, the melancholy limitations of this attitude. Depths were explored, if not with Dantesque clarity, at least with evident sincerity. The search for the primitive, the child-like, and the exotic was in reality a part of the search for the elemental. As such it expressed genuine dissatisfaction with the existing forms and was a revolutionary act. But it suffered from a lack of adequate, recognition of certain milestones in the path traversed by human beings in course of their social development, which recognition only could convert the negative quality of protest into a positive assertion of creative faith. In short, the unconscious was treated as beyond the pale of historical process. By calling it basic, fundamental and universal, it was given the status of an absolute. In this way one first-rate contribution of the post-war world, namely, the application of the Psycho-analytical method to social phenomena came to nought; the mechanistic approach of Freudian analysis acted as serious impediment to social change.
The other aspect of human mind was represented by those who studied the objective social situation. In their opinion, capitalistic civilisation had reached its doom and the nearness of its approach is registered by the perpetual strain to which the world has been put by wars, declared and undeclared. Their analysis, however, did not stop there; it went further in envisaging the future shape of things. Opinions differed from the Wellsian revival of an intellectual aristocracy to dictatorship of the proletariat. On one point agreement was marked, namely, the need for collective security to allow healthy social tissues to grow from within. How best to guarantee the necessary peace and order exercised the attention of all right thinking people during these twenty-five years. The League of Nations earned their first loyalty. But its influence withered under the blast of sovereign selfishness. It could not prevent Japan from invading China and Italy from annexing Abyssinia; its hypocrisy towards Spain was exposed and its all- round ineffectiveness proved beyond doubt. Today all realise that the League idea has no chance of success in securing peace unless the League itself so looses its character as to be something entirely different from what it is. In this context federal union idea appears on the scene.

About a year ago was published Clarence Striets’ jumble of a book, “Union Now” which advocated a federation of a number of states with a first-hand acquaintance of the democratic processes in Government. The idea of a federal legislature was mooted, but the details of its working were lacking. Sincerity was marked in every page of the book, but it was no substitute for a work-a-day hypothesis to reconstruct even one section of the Euro-American Society that it dealt with. Soviet Russia, the southern states of Europe, the whole of Asia, Africa, and South America were excluded from Striets’ scheme. In fact it ignored the very existence of empires and colonies. Since then W. B, Curry has developed the theme of Federal Union in his book, “A case for Federal Union” Today the federal unionists have become a sect with all its characteristic fanaticism and looseness of thought. There has not been the slightest indication of how the federal legislature to which the national legislature will somehow abdicate their power is going to be composed—by population or by area. These are fatal deficiencies and we leave the federal scheme to its votaries with the consolation that great ideas are very often thus conceived. At best the federal union will be the entente cordiale of England and France; though one is not sure how far that will stand the strain of the peace terms which France is likely to offer to Germany at the end of this war. From all evidence it is clear that France will not allow herself to be treated in the old way, in the matter of Rhineland. Even supposing that the entente cordiale is an accomplished fact how that will help the cause of peace, say in the Far East where Japan’s capital and shipping are making daily inroads into the preserves of England and France, or in the North Africa where two existing empires are constantly threatened by an expanding third.

The second large scale attempt towards peace was made by the Soviet Union, For about ten years Soviet foreign policy remained the safest bulwark of peace. It was, however, apparent that in the midst of a world so differently constituted, Soviet efforts could not very well succeed and she would finally develop a strong nationalism as a reaction to the conspiracy of the capitalistic world aimed at her destruction, This is what has actually happened. Whatever be the nature of the Soviet-German pact and the merits of the Soviet case in the Finland affair, the fact stands out that she can no longer be isolated, but is bound to play a dominant role in the establishment of a lasting world order—an order not based on the exploitation of one nation by another but on justice and fair-play.

It has been claimed on behalf of British Commonwealth of Nations that, today, it is the surest guarantee for world peace. The Germans and the Italians have, however, a different story to tell. Even if we concede that the relation between Great Britain and the Dominions, India—the colonies, is as it should be, the very unequal division of resources and living space as between the old empire and the rising one, is a sufficient cause for unsettlement. Therefore with the best of intentions the British Empire, by the mere fact of its being first in the field, cannot contribute to the cause of collective security.

But what has the Indian youth to do in these circumstances, when every avenue towards a better order has been closed? The answer seems to be to harness all his strength towards the attainment of freedom. But the last twenty-five years have made him cynical about phrases. Is it going to be freedom for a handful of men to exploit the rest? Shall we wait for freedom to come first and then take steps to secure democracy? Are we to forget the lessons of past experience when magnificent popular risings and revolutions came to grief under the heel of dictators and class rule? I do not think that we can afford to wait. When first things are taken first, second things are always referred to Greek Kalends. In my opinion this political struggle with imperialism has to be connected with an effort to liquidate all possibilities of the creation of vested interests under the cover of national struggle, Like war, national struggles have constant tendency to create possessing classes, which block future development. In other words, the students have to wage a fight on a double front. This would be a strategic error, if the two fronts were really separate. But it is high time that we understood that imperialism is not far away but here in India. Essentially, the consequences of imperialism are similar—by devious ways they jeopardise all chances of constructive efforts, damp all the fine enthusiasms for a better living order, confound the will, and darken the intellect. They live on war and destroy peace. If the Indian youth is interested in the removal of war and building of peace, he has to perform this double duty towards imperialism. The appeal of the national movement will lie in the extent to which it will give him opportunities for the performance of this duty. If the emphasis is on the political freedom he will be with it, but not of it; if it is an organic whole integrating the two issues of the removal of political bondage and prohibition of the domination of vested economic interests, he will be in it with all his advantages of clear thinking and spiritual abandonment. The lesson of history is clear: extend the area and enhance the quality of socialisation lest it is killed by the gathering pressure of empires and national sovereignties that breed war between themselves in unholy wedlock. This should not be allowed to be forgotten in the din of political slogans. A conscious India is a guarantee of peace.

This editorial was originally published in the Lucknow University Union Journal by Durga Prasad Dhar in March 1940. 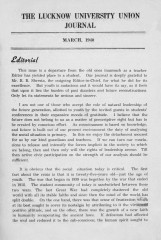 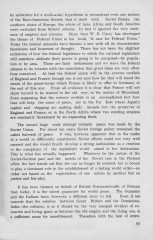 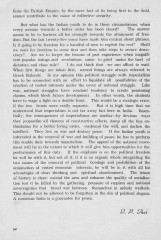 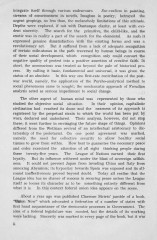 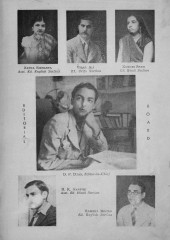